Our MANIFEST 40 just celebrated its sixth birthday. This quarterly review of the most widely-followed stocks by our community is a trove of information about companies attracting the attention of thousands of like-minded investors.

Our MANIFEST 40 just celebrated its sixth birthday. This quarterly review of the most widely-followed stocks by our community is a trove of information about companies attracting the attention of thousands of like-minded investors. Dashboard usage continues to grow and we track these companies to focus on stocks of interest and to monitor for shifts in return forecasts, fundamentals and/or quality.

The annualized rate of return for the stocks on our collective dashboards is 3.7% versus (-0.6%) for the Wilshire 5000 since inception — for an annualized relative return of +4.3%, a solid report card result, indeed. It’s a result that’s been bolstered by increasing stakes in Apple over the last couple of years. With investors spanning the globe, we mourn the passing of visionary Steve Jobs. Steve, you will be missed. Thank you. 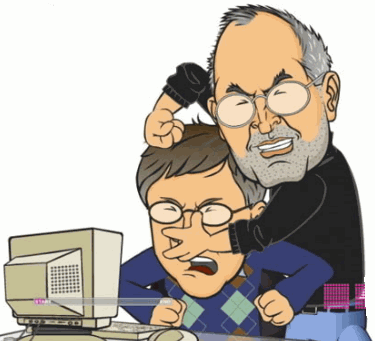 A little competitive “noogie” doesn’t hurt a bit. We featured a light-hearted look at the innovative arena populated by Apple and Microsoft and their leaders, Steve Jobs and Bill Gates, during our Christmas Countdown for 2010. Those who added or accumulated Apple have been rewarded handsomely. Investors who added Apple on 9/24/2009 have enjoyed a gain of 105.8% during a period when Microsoft has gained 6.1%.

We’ve always believed that the collective decisions made by our community of long-term investors is worth huddling over … a place where ideas are born.

Stryker (SYK) remains at the top of the leaderboard for another quarter. Microsoft (MSFT), Abbott Labs (ABT) and Teva Pharma (TEVA) managed to hold down positions #2, #4 and #5. But former leader Johnson & Johnson (JNJ) has been dislodged to #6 by a runaway batch of rolling apples as Apple (AAPL) has assumed the #3 slot.

AFLAC (AFL), Walgreen (WAG), General Electric (GE) and a recently surging stock price for Cisco Systems (CSCO) round out the top ten with no changes since June other than some gentle shuffling.

We think it makes sense to explore the companies changing positions on the list (up or down) and provide feedback on the strongest and weakest performers on the list. If you’re holding it while “everybody else” is selling, perhaps there are some questions that could/should be answered. The reverse is true too. If it’s gaining popularity and it’s not on your radar screen, perhaps a visit to the MANIFEST Forum is in order to discover what the rest of the community expects from a surging stock.

What companies are making the strongest gains among this consensus collection? This may be indicative of strong characteristics at the companies and warrant further study. The companies making the largest advances (by percent of dashboards) since 6/30/2011 are: Apple (moving from #8 to #3), Cognizant Technology (#21 to #19), Danaher (#33 to #25) and Bio-Reference Labs (#18 to #15).

The results of $100 positions invested in any of the Top 40 companies can be viewed at any time using our MANIFEST 40 Public Dashboard:

Coca-Cola (KO) is the new company on the list, entering the scene at #40 with a PAR of 9.4% and a quality rating of 83.1. Our hunch is that investors responded to a few quarters of low total return forecast (Value Line) in the low teens after waiting several years with the return forecast in low to mid-single digits.

Amgen (AMGN) was bumped from the MANIFEST 40 to make room for Coca-Cola. 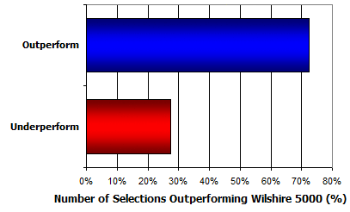 Accuracy. 72.5% of all selections have outperformed the general stock market.

The second highest MANIFEST rank belongs to Bio-Reference Labs (BRLI), an audience selection during the September Round Table webcast … perhaps somewhat explaining the company’s strong showing in the MANIFEST 40 standings of late.

McDonald’s (MCD) and Johnson & Johnson (JNJ) appear to be among the most “challengeable” with a PAR of 8.1% but we’d not expect to see any attrition unless their PARs were to approach money market rates. Former leader Home Depot (HD) continues to sag further down the list as persistent concerns remain with respect to the home improvement retailers and home building market in general.

Collective performance is still fairly strong versus the total stock market since inception, delivering a 3.7% rate of return, leading the Wilshire 5000 by 4.3 percentage points. With an overall PAR of 13.7% (and MIPAR at 12%), the future continues to be promising, just not as promising as what we’ve seen in recent quarters.