We selected AAPL back in May 2013 for Solomon Select. Apple has gained 40.2% annualized since then for a relative return of +28% for that decision.

Our previous Solomon Select features of Apple (AAPL) met with considerable skepticism — more than usual. Yes, it was clear that the growth surge would abate. Yes, it is clear that Apple is vulnerable to some king-sized speed bumps from time-to-time looking back at history.

We selected Apple back in May 2013 for Solomon Select. Apple has gained 40.2% annualized since then for a relative return of +28% for that decision. We note that Apple has been featured on numerous occasions during our monthly Round Table webcasts with all of the “lots” delivering exceptional relative returns so far. Apple is also #1 in the MANIFEST 40 but it wasn’t a charter member nearly ten years ago. Apple joined our list of community favorites during September 2009 and has generated an annualized relative return of +26% since then.

With return forecasts near historical lows while collective growth and profitability characteristics are lagging and sluggish, we’ll select from among the highest quality companies and an Apple a day fits that bill at the current time with a top shelf quality ranking and a low double digit return forecast.

Apple (AAPL): Business Model Analysis. Apple is the most widely-followed stock at Manifest Investing for a reason. The powerful surge in business from 2009-2012 has given way to a steady and mature 10% growth rate and leadership (20-25%) net margins. P/E expectations are muted compared to other opportunities and the net result is an exceptional quality company with a return forecast of 12-14%. 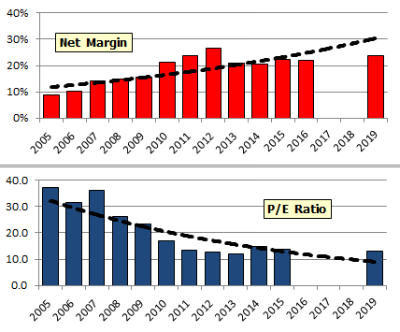 The trailing 5-years have delivered an average net margin of 23.1% and this is likely to plateau somewhere in that range.

Value Line is using 13x for the 3-5 year projection. The analyst consensus is closer to 14×. When looking at two candidates with 12-14% return forecasts where one has a projected average P/E of 25x and one is 13-14% — the bar is clearly lower to achieve for the lower target, in this case, Apple.

We also know that Apple is vulnerable to speed bumps. If you have a sizeable position in AAPL, you might want to review our trailing stop crystal ball concerning Apple at: Apple Sauce & Speed Bumps.