“It’s about creating strength in numbers ... finding common ground ... and supporting each other.” -- Jane Kim.

Bio-Reference Labs (BRLI). This relatively obscure real life CSI story has been a fairly dramatic example of discovery, diligence and stewardship over the last several years. Likely uncovered during our annual forensic review of the Forbes Best Small Companies, Bio-Reference Labs has been something of a roller coaster (when it comes to stock price) and a rock (when it comes to fundamentals.) The assaults by short sellers are legend and the common ground shoulder-to-shoulder support offered by our community of investors is even more legendary. So we celebrate … and shop.

It’s something of the end of an era.

The announcement of the merger between Bio-Reference Labs (BRLI) and Opko Health (OPK) is something of mixed blessing for a number of investors. Yes, the 30-40% sudden surge in the stock price of BRLI is welcome. But the widely expected overall condition of the newly formed combination is suspect. Many BRLI shareholders are justifiably skeptical and will tender their shares, capturing a fairly decent return over these last few years.

And a new hunt begins.

We doubt that Opko Health will remain among the MANIFEST 40 when the dust settles. Make no mistake. We will miss Bio-Reference Labs. From discovery (see Solomon Select, December 2010) to the events of the last month, we’ve collectively watched and supported fellow investors during assaults by short sellers and their gloom and doom attacks on BRLI. The Forum folders have a multitude of posts on the company — including some personal face-to-face highlights of interviews with CEO Mark Grodman delivered by one of our subscribers while attending a few annual meetings. Thanks, Nick DiVirglio!

A Place Where Ideas Are Born

Apple (AAPL) continues at the top of the leader board, a position the company has held for several months. AAPL first appeared on this listing on 9/24/2009 and proceeded to ascend to the summit. Johnson & Johnson (JNJ) and AFLAC (AFL) traded places at #5 and #6. Fastenal (FAST) jumped from #9 to #7 and Bio-Reference Labs has started the virtually certain migration off the chart.

It bears repeating. In addition to Bio-Reference Labs, both Apple and Cognizant Technology (CTSH) were not among the charter members of this manifest. Both AAPL and CTSH were added about 4-5 years after inception as subscribers featured both companies on dashboards during a period of continued strong quality that was accompanied by attractive prices for a fairly extended period. 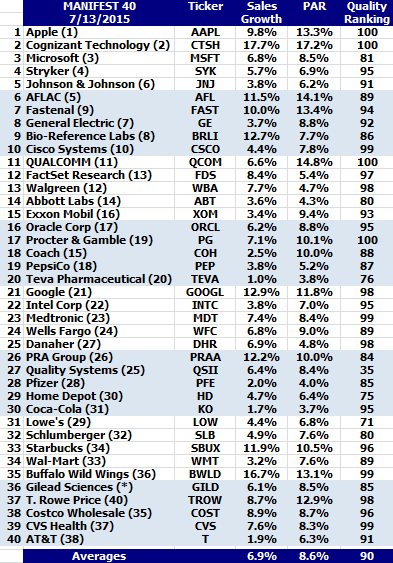 The accuracy rating (% of outperforming entries) of the current selections is 64%.

The figures in parentheses are the position of the company during the March 2015 listing of the MANIFEST 40. For example, T. Rowe Price (TROW) advanced from #40 to #37 over the last three months.

Bio-Reference Labs was a newcomer, first reaching the list back in December 2010. The company also ranked as a “charger” typified by a company making the strongest advances up the ranking on a quarter-to-quarter basis. This may be indicative of strong fundamentals (combined with attractive prices and return forecasts) and probably warrants further study.

Gilead Sciences (GILD) rejoins the MANIFEST 40 at #36. GILD is worthy of careful study by investors.

While not a typical surge demonstrated by a charger, Fastenal did move from #9 to #7 — solidifying its position among our favorites. As mentioned, T. Rowe Price (TROW) did make an advance from the bottom of the list and continues to deliver strong performance.

It’s a high quality list and can be used for “shopping” via:

What stock will we be celebrating five years from now that isn’t currently on the list? Place your bets. Share your ideas. Uncommon ground.