2012 was unkind to our band of groundhogs. Does that mean it’s time to throw in the towel? Not. Even. Close. 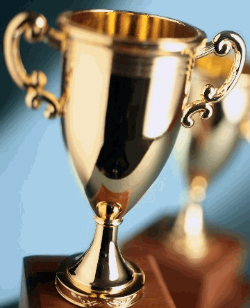 2012 was unkind to our band of groundhogs. Does that mean it’s time to throw in the towel? Not. Even. Close. We know better than to focus on any single year. And yes, this is a silly little contest. But the glass continues to be more than half full, not half empty. We blew an opportunity presented when a mere 25.8% of all domestic stock funds outperformed the Wilshire 5000 during Groundhog VI (2012) by rolling in with our own (worst ever) 23.9% market-beating population. Over six years, our Groundhog Nation has beaten the domestic stock funds 4-out-of-6 … with 51.6% of participating hogs beating the Wilshire 5000 since inception. The only towels needed around here are to towel off … and jump back in the ring.

“Hey Mark, I need for you to take a closer look at Lumber Liquidators (LL).
Check the consensus forecasts and see what you think.”

Bernie said it with a conviction that commanded attention. It was a few weeks before Thanksgiving 2011 and I’d gathered once again with the stock pickers of Mid-Michigan at their annual breakfast. We shared some of their stories and discussed the outstanding results on these pages in the past.

Once again, we have to wonder about the water. What’s in the water? Because the guy nudging us to take a closer look at Lumber Liquidators was 2012 Groundhog Champion, Bernie Meister of Midland, Michigan. The Midland zone in central Michigan is home to 2009 individual champion Paul Witt, Ken Kavula’s Wolves (2010 group champions) and last year’s group champions, Northern Traders of Traverse City, Michigan. Bernie is a long-time investment club partner and has participated for many years. There are several successful investment clubs in the Midland region with 30, 40 and more than 50 years since inception. There’s clearly something in the water and the long-term track records of positive relative returns (and smiles) are a living testimonial. 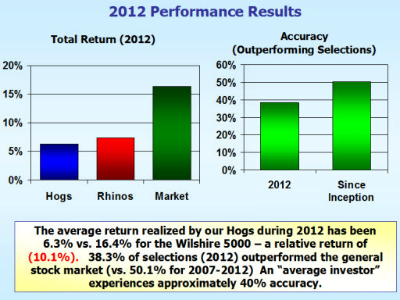 It was a year like many years — except that it was inordinately challenging for our band of groundhogs. The culprits were the usual characters, the stocks that appeared in the majority of participant portfolios: Apple (AAPL) and Quality Systems (QSII). Coach (COH) can also shoulder some blame, breaking down in the last several weeks.

Cy Lynch covered the perils of institutional concentration in Apple in the last couple of fund features … and the impact is fairly significant when checking in on the S&P 500, Nasdaq-100 or Wilshire 5000 over the last 6-7 months (see accompanying image.) Widely-chosen Quality Systems (QSII) also sagged significantly, turning into a 5-ring circus sometime during 1Q2012 and adding at least one more ring while dropping from $45 to $15 during 2012.

It would take some serious number crunching — but we’re curious how Groundhog Nation would have fared with trailing stops on these two flame outs.

That said, we celebrate that 51.6% of all participating groundhogs (individuals AND clubs) have beaten the market over the last six years — something to howl about, if a groundhog is permitted to howl. 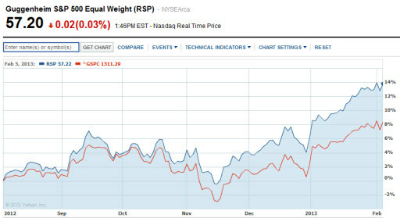 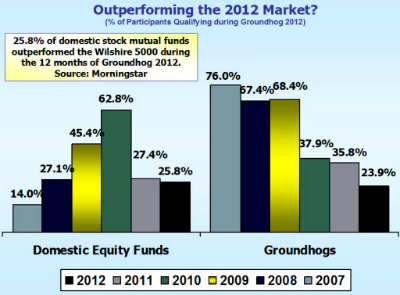 Groundhog Results: The Good Old Days. Groundhog Nation has now outperformed the Wilshire 5000 in four of the last six years, an admirable winning percentage. But we’d be lying if we didn’t admit that we yearn for results that resemble 2007-2009 when it comes to performance vs. an actively-managed universe of funds.

Speaking of clubs, our group champion for 2012 is the Broad Assets Investment Club of St. Louis, Missouri. The ladies definitely strayed from the well-trodden path that includes the Apples and Coaches of the world, instead selecting Dorman Products (DORM), Ituran Location & Control (ITRN), Vistaprint (VPRT) and Insperity (NSP). Transcend Services (TRCR) was acquired during the year. Four of the Broad Asset selections beat the market, delivering an annualized total return of 27.5% for the portfolio.

Once again, Ellen Hall’s Women Investment Network (Maryland) was in something of a photo finish and Ellen finished #10 in the overall standings. Ellen and last year’s individual champion, Nick Stratigos, have consistently been among the leaders near the end of most annual contests.

Our own Cy Lynch finished #2 in the overall standings, solidifying his ranking on the All-Time Leader Board. The top five was rounded out by accuracy leader Richard Cardner and Chuck Brunell has held and challenged for the lead in each of the last few years.

Bernie’s neighbor, Paul Witt (also of Midland, Michigan) continues to lead the all-time annualized relative return standings at +22.2% (2009-2012). His annualized rate of return for that period is 41.4%.

Heavy Hogs (2013). This list of (21) stocks are the most frequently selected stocks for the individual and group entries in Groundhog VII. Qualcomm (QCOM) was the most popular stock this year and it’s clear that growth ranked pretty high on the screening criteria of this year’s combatants.

Mark Robertson checks in at #2 in the all-time standings with an annualized relative return of +18.3% since the inception of the Groundhog Challenge.

The top honors for our participating groups belongs to Susan Maciolek and her Bower City ladies — our 2008 group champions. Bower City has participated for the last five years and has an all-time relative return of +7.3%.

Larry Dix (of Cleveland) continues to lead the all-time accuracy standings — with 75% of his selections outperforming the Wilshire 5000 over the last five years.

Selections were much more dispersed than in previous years and it will be interesting to see how this unfolds on 2/2/2014.

Our Groundhog Challenge now has six years on the books and we’re hopeful for a return to the glory days with the relative returns and accuracy on display during those first three years. We’re pretty well convinced that you can’t have a shadow without a little sunshine. And we do know this. The vast majority of selections are made with quality and exceptional (but reasonable) return forecasts in mind. That fact alone separates our wonderful group of courageous groundhogs from the field of average investors and bodes well for future shadows of success.