Straight out of this month’s Sweet 16 and near the top of the list of candidates, let’s dig in for a closer look at AAN and see how it holds up under scrutiny.

Straight out of this month’s Sweet 16 and near the top of the list of candidates, let’s dig in for a closer look at Aaron’s (AAN) and see how it holds up under scrutiny. Aaron’s is a leader in the sales and lease ownership and specialty retailing of residential furniture, consumer electronics, home appliances and accessories with more than 2,000 Company-operated and franchised stores in 48 states and Canada. Founded in 1955 by entrepreneur R. Charles Loudermilk and publicly traded since 1982, Aaron’s was a pioneer in the furniture rental industry.

Aaron’s recently bought Progressive Finance. This combination seems to be unnerving to the rhinos and although the company has fared well during the recession and weaker economic conditions in the aftermath, there is pressure on the profitability forecast for 2014 and 2015 — and when the company starts talking “turnaround”, it does nasty things to a bunch of rhinos who are already squeamish. 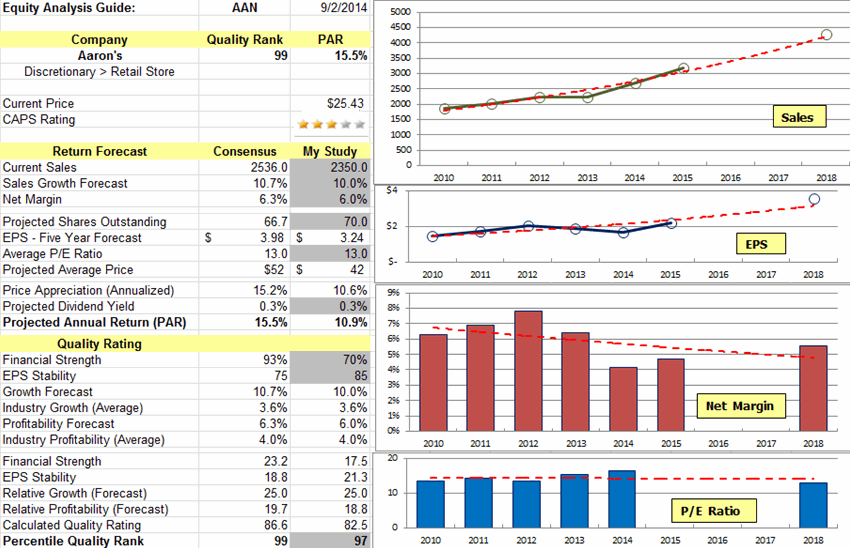 Aaron’s (AAN): Business Model Analysis. This image/profile is a prototype, a work-in-progress, as we explore enhancements to the company reports (equity analysis) pages. On the left, the consensus expectations of the analysts are aligned with study inputs for growth, profitability and valuation to support comparisons, sensitivity analyses and reconciliation of potential variances. The thumbnails on the right provide historical evidence and trends.

Based on the historical trends, it’s feasible to envision a 6% net margin. The 3-5 year forecast by Value Line is 5.6%. The trailing 6-year average, including a couple of years of noted “challenges” is 6.4%.

The quality RANKING for AAN is 99 with a financial strength composite (percentile ranking) of 93. Earnings stability is 75.

The stock price peaked at $36.70 earlier this year — so the current stock price of $25.43 represents an approximate 30% drop from the highs.

Value Line believes that “[AAN] will likely trail the market over the next year. But AAN may interest long-term investors.”