Our reminder about core investments and the result is a blend that raises the probability of success for long-term investors, a “smoothie” if you will. Join and relax with a late summer smoothie, a blend of blue chip and NASDAQ. 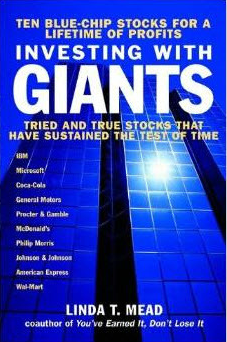 $100 Into Ten Giant Blue Chip Stocks Back in 2002 … BEAT THE MARKET Linda T. Mead’s book was published on March 1, 2002 … just as the bear market was really getting ready to sink its teeth. Combine the Great Recession of 2008-2009 and your intuition is probably fairly lackluster performance since 2002. You’d be wrong. Really wrong. TIME is not a 4-letter word.

Another summer is winding down. We appreciate your patience as we continue our development efforts and we’ll return to normal publication schedule in September. The past several weeks have afforded a number of opportunities to spend time with individual investors and groups and — as always — we’re grateful for the reminders and reinforcement that we witness and that you provide. Over the last few days, we’ve had some fun with a group of stocks that have outperformed Google (GOOGL) since its IPO on 8/19/2004. Combine that with a reminder about core investments and the result is a blend that raises the probability of success for long-term investors, a “smoothie” if you will. Join and relax with a late summer smoothie, a blend of blue chip and NASDAQ.

The reminders come from all corners. In one case, it could be a group of ladies in an investment club in central Michigan and their formidable portfolio. In other cases, it could be the performance of our relatively passive Bare Naked Million portfolio as it continues to chug along on the wings of industry leaders, bought on sale, and rarely sold. It can also be the individual retirement portfolios of friends and family as we watch companies like Colgate-Palmolive (CL), Johnson & Johnson (JNJ) hold down the fort while companies like Priceline (PCLN) provide some sizzle. It could be the results of our Hoard demonstration portfolio.

“The stuff that you’ve taught us about portfolio design delivers — at least for us — a stark clarity. We know that a portfolio is a puzzle built from pieces. We also know what matters. Design and maintain for enough return, with sufficient quality to provide stability … and enough overall growth to encourage us to discover new opportunity.” “We realize that there are no magic black boxes and certainly no guarantees — but we have something to aim at and that makes all the difference in the world to us."

Investing With Giants. Linda Mead featured a collection of ten household names in her investing book back in 1982. We would argue that one of the companies was different than the others and arguably didn’t belong in a blue chip group. In any event, the collective result over the last 12 1/2 years is a relative return of +2.1%.

We’ve heard those words from a couple of different directions in a couple of different ways and frankly, we’re excited about what the next chapter holds. And yes, it’s about “getting the smoothie right.” I discovered Linda T. Mead’s book on blue chip investing while thinking about the smoothie recipe. Prominently displayed on the cover of her book, Investing with Giants, are ten companies that many of us would regard as blue chip, or core. (Some would appropriately argue that 1-of-the-10, then and now, doesn’t match the other nine.) 12 1/2 years later, the performance of these ten companies BEATS THE MARKET.

Googling Up Some Pizazz

As we whip up the smoothie, we know that the ingredients must necessarily include a blend of high-quality companies who also happen to have a blend of life cycle growth rates. The Giants featured will generally have single digit growth expectations. The recipe nudges us to also discover companies that augment and complement the blue chips with a good dousing of growth potential. This is how we build and maintain portfolios with overall growth rates of 10-12%.

Performance Results: Since Google IPO (8/19/2004). Bespoke Investment Group posted a comment on the 10-year anniversary of the Google initial public offering. They challenged investors to come up with the 10 current S&P 500 companies who had outperformed Google over the last ten years — no small feat. GOOGL has a 28.0% absolute total return (annualized), clocking in at a relative return of +19.8% versus the S&P 500! On the MANIFEST Forum, various contributors rounded out the list. We note that all (10) are NASDAQ companies, once the domain of 4-letter tickers. None of these qualify as 4-letter words.

Which brings us to a second list of companies this week. The guys over at Bespoke Investment Group celebrated the 10th anniversary of Google’s initial public offering by noting that Google (GOOGL) stock has done very, very well over the last ten years. How well? 28.0% annualized. Bespoke shared that only ten companies in the current S&P 500 have fared better. In the MANIFEST Forum, we held a safari and outed all ten companies as shown in the accompanying table.

In a subsequent tweet, the Bespoke guys (@bespokeinvest) also observed that 145 of the companies in the S&P 500 back on August 19, 2004 no longer existed. For long term investing, it’s a theme that we’ve visited on numerous occasions. If we’re selecting companies based on our imagination and an image of the company on the five year time horizon, it’s generally helpful for that company to exist when we arrive at the horizon. We’ve used the inspirational image of Warren Buffett closing his eyes and imagining the company 5-10 years out in the future.

We couldn’t help but notice that the Google Beaters were all from the NASDAQ. At one time, all NYSE tickers were 1-3 letters and NASDAQ were 4-5. While this is no longer the case, it’s pretty clear that this is nothing short of a commercial for shopping for promising future stalwarts among the NASDAQ type of companies.

Blend the Google Beaters with Mead’s Giants and you have pretty delicious smoothie — generating an annualized return of approximately 25% for a hypothetical smoothie portfolio. Of course, it’s crazy to think of going 20-for-20 but “shopping in the zone” certainly improves your chances of arriving in the neighborhood. 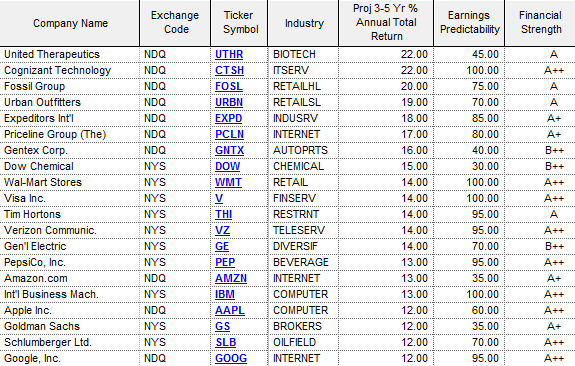 Smoothie 20 (8/22/2014). Not so much a screening result as a sampler, this list of 10 stalwarts from the NYSE and 10 “Googlers” from the NASDAQ all have average annual total return forecasts greater than 12% for the next 3-5 years. Minimum Financial Strength rating is B++. Source: Value Line Investment Survey, Investment Analyzer, Summary & Index.

The accompanying Smoothie 20 sampler portfolio was built using a group of time-honored NYSE leaders with relatively high current return potential and combined with ten NASDAQ leaders. Yes, Virginia, Google (GOOGL/GOOG) is on the list. When you can’t beat them, you join them and hope to make the collective stronger. Linda Mead writes of investing with giants. Core investing matters. But when we think of investing with giants, we think of “Investing With Our Friends.”