What would it take to capture lightning in a bottle and identify companies that could deliver leadership returns? 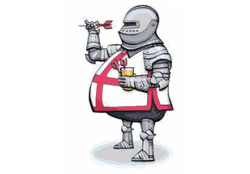 Monthly Round Table Webcast Manifest Investing participates in a FREE monthly webcast that is co-sponsored by the Mid-Michigan chapter of the National Association of Investors (NAIC). The 75-90 minute program features timely topics and educational themes while including discussions of the favorite investable ideas from Ken Kavula, Cy Lynch, Hugh McManus and Mark Robertson as well as a number of guest knights and damsels.

The group has collectively achieved a +2% advantage to the Wilshire 5000 over nearly four years. For more information and to register, visit events.

Seven Groundhog Challenges. The most recent contest ended with the same group winning for the second consecutive year — toting home the group trophy for 2012 and 2013. At the heart of the their conquest is the company, Lannett (LCI) — a generic pharmaceutical company. As the Broad Assets Investment Club of St. Louis, Missouri is exchanging “high fives” on the podium, we can’t help but wonder if it might be possible to extract a lesson from their success. What would it take to capture lightning in a bottle and identify companies that could deliver leadership returns? As it turns out, we believe we’re looking a case study of victory by escape velocity …

“Those who escape [demise] are surely destined for good fortune later.”
— Author Unknown

The saying may have Chinese origins … or it may have come from missives about business plans and strategies by none other than Thomas Jefferson.

Jefferson is credited with a great number of inventions and inspirations. He knew that worthwhile endeavors were borne of dreams but only realized when recognized by the masses in the form of demand for products and services. There’s an advertisement on television that displays the garages of people named Hewlett, Packard and Jobs. The message is clear. Invent something that has utility and make it widely-available. Make it useful. It could be an answer to a Maslow-based need or it could be entertaining or recreational, but the key is that at some point during the life cycle of the product, service and/or company — a critical mass of consumers will be necessary. Capture enough of them and sustained growth and profitability persist and in some cases, thrive.

In others, and this is true for the majority of startup enterprises, wither and fade on the vine having failed to attain the so-called escape velocity and the early stages of little or no growth or profitability. The accompanying figure illustrates this company life cycle. As investors, we’re keenly interested in the breakthrough moment for continued profitability. Escape velocity. 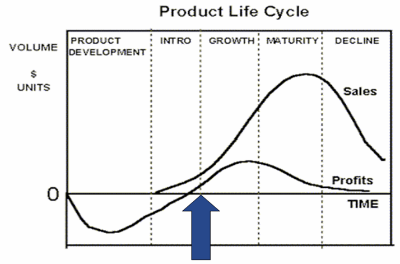 Lannett: A Bold and Broad Asset

These are the companies that try our souls when it comes to the perspective provided by price-to-earnings ratios (P/E). Why? Because every company has a point in its life cycle where earnings are emerging from negative values to positive values, passing through zero. And when earnings are zero (or close to zero) the P/E ratio is wrecked.

Some companies pass through zero, on the upside and downside, a few times before reaching escape velocity. This is the case with Lannett (LCI) as shown here, the engine behind the victories over the last couple of years by Broad Assets.

When Lannett reached escape velocity and earnings stayed positive, continuing to the upside … LCI tripled during 2012 and tripled again during 2013 as the stock price ultimately tracked the earnings results. The expectations for 2014 and 2015 as shown in the accompanying figure suggest that LCI isn’t out of rocket stages or booster rockets yet. This probably explains why Broad Assets has stuck with the company for the 2014 contest.

Lannett (LCI): Business Model Analysis. Lannett is a relatively small company with a persistent and solid growth rate. Earnings “emerged” in 2009-2010 only to encounter a “speed bump.” At the time of selection by Broad Assets, the earnings forecasts had turned positive again with outsized expectations for 2012 and 2013. The club stuck with the company for the 2014 Groundhog Challenge most likely on the strength of the 2014 and 2015 forecasts shown here.

We Wanna Rocket, Too!

Think about companies like Under Armour (UA). The company appears to offer an excellent product and management has managed to deliver outstanding results. Yet, unless we frame those early years in the context of life cycles, escape velocity, find a way to rationalize irrational P/E ratios during this stage — we’ll be unlikely to assume early ownership of a company like this. It’s one of the non-core special situations that need to be treated differently. Other examples include companies like Netflix…

How might we find study candidates that fit this mold? By searching for current characteristics that are similar to conditions for Lannett back in early 2012. The hunt becomes one of seeking:

(2) Financial strength of B+ or better.

Note the earnings forecasts for Lannett in the accompanying business model analysis. Essentially, we’re trying to isolate some of those “bubbles” on the right hand side where earnings are defying gravity. During the April Round Table, this approach yielded Universal Display (OLED) and the company was selected for the tracking portfolio by both Mark and Ken Kavula. Let’s hope for a demonstration of escape velocity. Orbit at will.