One of the things we do at MANIFEST is attempt to turn some of the random noise and chaos into something less random — through demonstration of time-honored principles and philosophy that goes back over seven decades.

One of the things we do at MANIFEST is attempt to turn some of the random noise and chaos into something less random — through demonstration of time-honored principles and philosophy that goes back over seven decades. We’re 12 1/2 months from our 10th anniversary … and we look forward to an evolving 2014.

There’s some discussion that the market trends during the early part of January can be an indication of what to expect from the rest of the year. 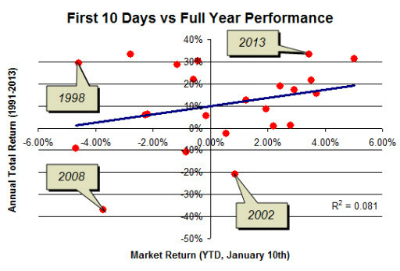 Starting Gate Harbinger? Does market performance early in the calendar year portend anything about expectations for the full year? Not so much … 2014 checks in at -0.09% through 1/10/2014, a path to high single digit returns for this year?

Here’s a look at a plot of the market performance from January 1st through the 10th versus the year-end results from 1991-2013. There’s a lot of scatter and the most that can be said is that there does appear to be a “general tendency.”

Groundhog VII (2013 edition) comes to an end on February 2, 2014. we have seen a number of photo finishes over the years in our annual stock selection challenge.

This will not be one of those years.Last year’s group champion, The Broad Assets investment club of St. Louis has dusted the field — and barring calamity and collapse at a couple of their key positions during January — currently has a 111% total return for 2013. (That’s NOT a typo) In similar fashion, Andy Pagorek of Chicago is up 82% for the individual championship. More on them to follow in the February newsletter.

Individuals and groups are encouraged to join the fray. Discuss it during your January club meeting and either post your 2014 entry in the MANIFEST forum under the Groundhog Challenge or submit selections to markr@manifestinvesting.com BEFORE February 2, 2014.

Stay tuned. We’ll be launching a series of webcasts and events centered on investing-with-friends. We’ll also be updating stock reports and overviews on the MANIFEST 40 and other stocks appearing on things like club and Groundhog dashboards over the next few weeks.