You don’t have to google very long to come up with a long list of articles and commentaries about the death of “buy and hold” as a strategy.

The Stocks You Follow: September 2013 Update. Eight years. We’ve continuously monitored the 40 most-widely followed stocks by our community of subscribers at Manifest Investing for eight years. We think it’s more than a fair assumption that many of these are in your real money portfolios … and for that, we’re optimistic and grateful. This managed “tracking collection” of your collective favorites has outperformed the Wilshire 5000 by +2.9% (relative rate of return, percentage points). The aggregate absolute return has been 8.0% during a period when the annualized total return for the general stock market has been 6.9%. With 8 years in the can, the average holding period is 5.4 years, begging the question about the effectiveness of buy-and-hold strategies …

Peak Performance. Our MANIFEST 40 is a celebration of collective excellence in stock selection, strategy and disciplined patience. With an average holding period of 5.4 years, the annualized relative return of the current tracking portfolio is nearly +5% versus the Wilshire 5000, aligning very well with our long-term objective. With above average growth (8.9%) and a return forecast of 11.5% (vs. 6.2% for the general market) we see continuing solid performance ahead …

“We have always believed that the collective
decisions made by our community of
like-minded, long-term investors
are worth huddling over …
a place where ideas are born.”

Eight years. We established and have been tracking your most widely-followed stocks for eight years. Many of the original “40” are still on the list. There have been relative few kings-of-the-hill, including Bed Bath & Beyond (BBBY), Stryker (SYK) and current pole position and community favorite, Apple (AAPL).

The annualized rate of return for this tracking portfolio is 8.0%. The Wilshire 5000 has gained 5.1% (annualized) over the last eight years … so the relative return (alpha) of these community favorites is a stellar +2.9%.

The relative return of the ACTIVE, current 40 positions, in the tracking portfolio is even better at +4.8% annualized. For context, only 4.1% of the equity funds tracked at Morningstar have a better relative return over the last eight years.

25-of-40 active entries have outperformed the Wilshire 5000 since selection for an accuracy rating of 62.5% compared to 63.2% in June 2013. 62.5% is well above “average” for selecting “winners” by the overall universe of investors and traders.

The average holding period is now 5.4 years. More on that shortly … 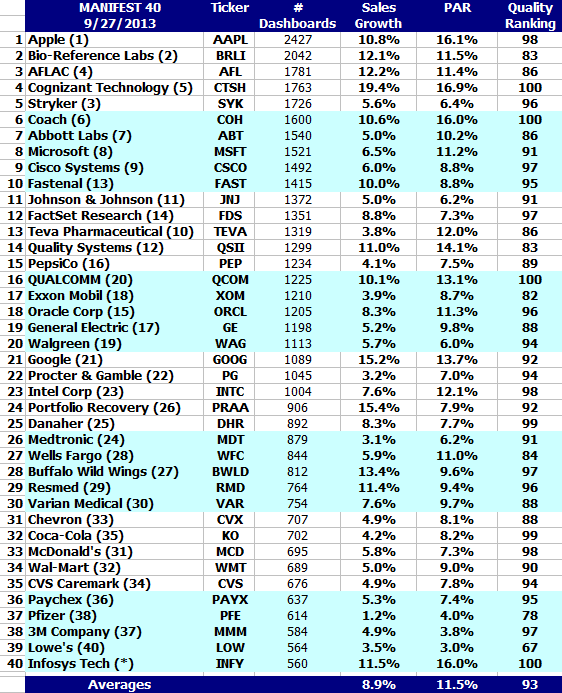 MANIFEST 40 (September 30, 2013). These are the most widely-followed stocks by subscribers at Manifest Investing. Current leader Apple (AAPL) was added to the list back on September 24, 2009 and steadily climbed the ranks while generating a relative return of +18.3% (annualized) over the trailing three years despite the swoon of 2013. Figures in parentheses are the ranking back on June 30, 2013.

Qualcomm (QCOM) has continued to move up the charts, going from #20 to #16 over the last three months. QCOM had the greatest percentage gain in dashboard appearances. Other companies making strong showings of interest include Coca-Cola (KO), recent Solomon Select feature Cognizant Technology (CTSH) and Wells Fargo (WFC). It seems that many community members are heeding Buffett’s advice that “… when you can find a better bank than Wells Fargo you should buy it. Until then, buy WFC.” The results of $100 positions investing in any of the Top 40 companies can be viewed at any time at:

The only newcomer is actually a returning participant, Infosys Tech (INFY). Along with Cognizant, these information technology companies continue to appear near the top of our screening results at the present, and with better days ahead globally, portend some potentially attractive returns.

But this 8-year perspective really isn’t complete without taking a moment to cite the charter members of that first MANIFEST 40 that are still on the list — delivering our answer to what buy-and-hold really, really means. 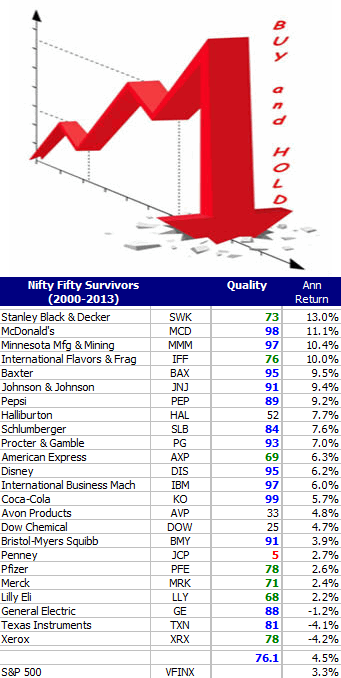 Funeral For A Friend?

You don’t have to google very long to come up with a long list of articles and commentaries about the death of “buy and hold” as a strategy.

If they present buy-and-hold as a strategy, they’re wrong.

Buy-and-Hold is not, and never was, a strategy. It’s also not what has been championed by over seven decades by the investment club movement.

Following the exhortations of the likes of Benjamin Graham, David L. Babson and George Nicholson, Jr. (often cited as the grandfather of the modern investment club movement) it was NEVER “Buy. Hold.”

It always was, “Buy. Hold. For as long as it makes sense to do so.” It makes sense to do so as long as (1) the return forecast for a given stock is superior to market averages or your own objective based on core/non-core philosophy or (2) you can improve portfolio return expectations and/or quality by switching from one stock to another company or group of companies. The answer is centered on portfolio design & management. With an average holding period of 5.4 years, the MANIFEST 40 is not completely passive, but active when it makes sense to do so. Cancel the funeral.

It bears repeating. It was never buy-and-hold. Buy-and-Hold is not a strategy. For us, it is and has always been buy-and-hold-for-as-long-as-it-makes-sense.

We do have a model portfolio that can be construed as buy-and-hold, at least from the perspective that we don’t talk about it much and after several years, we can still count the number of sell transactions on one hand. And even this disciplined, patient portfolio is willing to sell when it seems to make sense to do so.

That portfolio is our BareNaked Million portfolio. Formed back in January 2007, it was built using a blend of core exchange-traded funds, Vanguard Growth (VUG) and a concise collection of industry leaders with superior return forecasts. It literally was the answer to a subscriber question, “What would you do, now, with $1,000,000?”

When Fifty Was Nifty

Jeremy Siegel revisited the infamous Nifty Fifty back in October 1998 — some 25 years after the peak of the Nifty Fifty back in December 1972, widely regarded as the peak of the mania. The average P/E ratio of the Nifty 50 during December 1972 was 42x and the premise held that price didn’t matter. You could buy any of these industry leaders and not worry about how much you paid. It was buy-and-hold at its most extreme.

Siegel’s discovery was that the Nifty Fifty actually delivered an annualized total return of 12.5% (1998) versus 12.7% for the S&P 500. In the accompanying chart, we take a look at the surviving companies from the 50 since the peak of the NASDAQ bubble in March 2000. Again, over the 13-year period, seemingly wildly high P/E ratios failed to identify stocks that would underperform the market.

Is Buy-and-Hold dead? Not even close. Pay attention to quality (note the higher quality rankings at the top of the accompanying chart) and seek incrementally higher return forecasts, even for core holdings. But know that core holdings — vis a vis the MANIFEST 40 and BareNaked Million — can reside in portfolios for extended periods. In a word, “Hold … for as long as it makes sense to do so.” Eight years of MANIFEST 40. We see no reason for the next eight to fail to resemble the last 40 … or 70 years.