If you start investing the maximum allowable 401(k) contribution -- and discover opportunities using a combination of forecasted returns and quality -- when might you reach $1,000,000?

Question: It’s January 1995. If you start investing the maximum allowable 401(k) contribution — and discover opportunities using a combination of forecasted returns and quality — when might you reach $1,000,000?

Sure, we know it’s ‘just a milestone’ and that it’s merely a number of digits. Call us crazy, but we believe Tin Cup is a demonstration of what is possible. And that there’s a future for helping people to get the most out of their 401(k) campaigns. 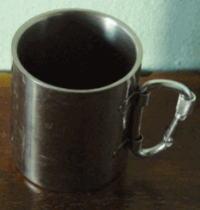 “If the stock market were truly efficient, I’d be a bum on the street corner with a tin cup.” — Warren Buffett. He’s not. And if you see Warren on a street corner in Omaha some day, he’ll probably be handing out coupons to Dairy Queen. We believe that despite increasing chaos and decreasing trust in the markets, there are buying and selling opportunities. YES, You Can Beat The Market!

A million dollars isn’t what it used to be. But try telling that to the hordes of people buying MegaMillion lottery tickets last weekend. Most if us would welcome the challenge of figuring out what to do with $640,000,000. Those who still have land lines would probably discover that it starts with disconnecting the phone. We’ll be taking a closer look at “How much is enough?” and examining how much freedom/retirement is possible with $1,000,000. The answer and guidelines obviously depend upon who you are and what the income stream sources are for your specific situation.

We also hoped that Tin Cup would reach $1,000,000 on the weekend that included St. Patrick’s Day. As if many of us needed any encouragement, we’d have been compelled to consume a few extra green bubbles in celebration.

But our Tin Cup demonstration portfolio decided to wait until March 26, 2012. Starting the day at $990,000 — we watched as stocks soared on one of the best days of recent memory. Tin Cup ultimately peaked at $1,015,000 before taking a breather.

More Than A Milestone?

We think so. According to a recent report on the status of 401(k) plans, the average balance for people approaching retirement is $78,000. Another report last week confirmed that a huge percentage of investors made absolutely no allocation decisions during calendar 2011.

Passive. Non-participative. When was the last time you saw an ostrich sipping an umbrella drink at a posh resort? 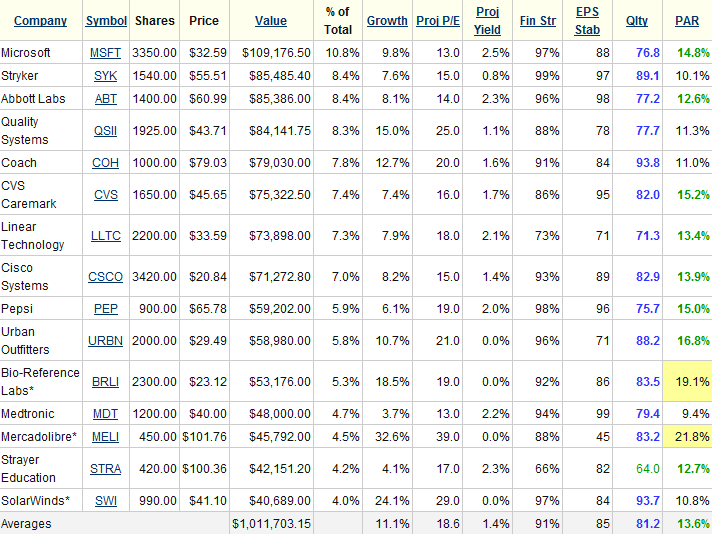 Tin Cup Demonstration Portfolio: Million Dollar Moment. This is the dashboard for Tin Cup on March 26, 2012. Linear Technology (LLTC) has been in the portfolio since 2004 and Coach (COH) has delivered a fairly powerful performance, tripling since Sept-2008. All positions have positive returns except for Medtronic (MDT) and Strayer (STRA). 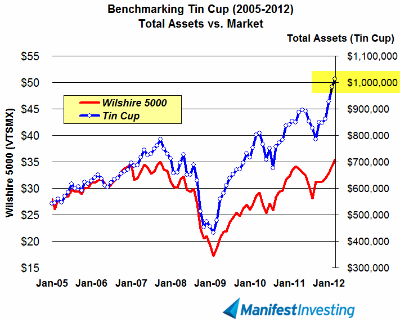 Million Dollar Moment: Tin Cup Demonstration Portfolio. We’ve detailed every single transaction and decision in this model portfolio in the monthly newsletter since May 2005, soon after the inception of Manifest Investing. The relative return is +2.1% over the last five years.

Seriously. Everything we do revolves around stacking probabilities in an uncertain world where there are no guarantees and past performance often fails to resemble what the future ultimately holds.

The memory is indelible. I was presenting at an investment education conference in Springfield, Illinois and my parents had joined me for the weekend. I came down for breakfast to find Mom and Dad engaged in animated discussion with the investor relations representative from Biomet, the medical device company. The IR rep described the reality that $2000 invested in Biomet back around 1980 was — at the time — approaching $1,000,000. I was skeptical. I checked his math. He was right. Accurate, also.

I remember Dad leaning back and saying, “My God. We could have done that. I could have identified Biomet and literally made that $2000 with my IRA back then if I’d only known. The frightening thing is that this is not science fiction. IT COULD HAVE HAPPENED.”

The rest of the story is that Dad had participated in our investment club back in the early 1990s and long story short, companies like Cisco Systems, Oracle and Colgate-Palmolive have made a massive difference in an individual retirement account that, prior to the club and the accompanying destruction of mystery, was invested in ladder of CDs with APRs ranging from 1-2% … and he was getting charged $100/year for the privilege.

Investing In The Best

Enter Tin Cup. We launched this demonstration portfolio using January 1995 as the starting point and have chronicled every single decision and transaction on these pages monthly since the inception of Manifest Investing back in 2005.

The continuous detection of high-quality companies on sale is a potential path to formidable results. Using the maximum allowable pre-tax contribution (with no matching!) to a 401(k) since 1995 and simulating the capability of investing in individual companies as part of that effort/program, Tin Cup becomes a display of what is possible.

Granted, qualified plans that allowed investments in individual companies were pretty rare back then but they’re becoming much more pervasive and ubiquitous. As a case in point, of the 20,000 people who work at my wife’s company, 20% have accessed as use a self-directed option that includes individual stocks. (We launched the fund-based Hoard model to demonstrate implementation based on funds only. Same idea.)

We suppress the impact and distraction of emotions using a simple method.

1. We search for the highest quality companies based on a combination of financial strength, consistency of long-term performance and relative competitiveness when it comes to growth and profitability. We score the four factors, rank the ~2500 companies that we follow and shop among the top 20% of all companies.

2. We only buy them (add/accumulate them within Tin Cup) when they’re on sale. We identify this based on the projected long-term return forecast using 5-year time horizons.

Join us as we prove that ostriches can fly and soar with the eagles. Next stop: $2,000,000. For now, raise a cup and toast what is possible.