Ken Janke served a nation of long-term investors for nearly 50 years as a key influence in the modern investment club movement.

Ken Janke served a nation of long-term investors for nearly 50 years as a key influence in the modern investment club movement. He is widely-regarded as one of the most thorough and respected golf historians and has written a few books on golf. One, entitled “Golf Is A Funny Game … but it wasn’t meant to be” extrapolates pretty well to the world of investing as we’re subjected to humbling moments along the way … continuously learning and pressing on while we make this journey. Ken’s life journey included a mother lode of service to charitable organizations all the while devoting himself to his spouse Sally and his family. With his colleagues George Nicholson and Tom O’Hara, their efforts in the modern investment club movement enabled hundreds of thousands of long-term investors to access “better futures.”

Kenneth S. ‘Mr. NAIC’ Janke, Sr.
(5/13/1934 – 7/23/2011) was a formidable champion of long-term investing. He
convinced his own reluctant and skeptical father by investing enough of Dad’s nest egg
in a basket of utility stocks that the dividend checks completely funded the monthly utility bills. Needless to say, our community of long-term investors gained one more advocate that day. Patience and discipline were among his favorite words. Thanks, Ken.

It was one of our first meetings. I had been invited to consider joining the staff of Better Investing magazine back in 1998 and this was one of my first personal one-on-one encounters with Mr. NAIC.

“Well … yes, Sir … not as much as I used to. Playing golf with clients was part of my day job at one time. My manager took me for my first round in years to Cog Hill.”

“First, it’s Ken. Second, that’s not a day job … that’s a sneak preview of heaven on earth. (grinning, big) Third, did I hear you correctly? They refer to that course at Cog Hill as Dubsdread for a reason. These people were your friends???”

“Yep. Dubsdread with all the rust I could carry. My revenge was that I nearly killed them all while battling one of those overhung bunkers. As I was smacking my sixth attempt at getting out of that trap, I noticed that all three of them were literally rolling around on the ground laughing with sides aching.”

“Real sand. More like a Venus fly trap. Did you finish the round?”

“Absolutely. In fact, we returned to the scene of the crime a couple of years later and I shot a 70-something with a mulligan. They all autographed that scorecard.”

I may have embellished a little and paraphrased a little in recalling that story, but not much. It was first of many moments where he shared lessons learned and delivered context to the world of investing. I vividly recall the first time we met after Ken had delivered a keynote address to an Investors Fair audience in Chicago in the mid-1990s. His remarks included the observation that Americans consume 75 acres of pizza daily and proceeded to wrap comments like that around a collection of 12-13 companies that we came to call the Janke Dozen. In a standing room only crowd, you could have heard a pin drop and pencils and pads were poised for his stock study suggestions. From AFLAC to Emerson Electric to Donaldson to Minnesota Manufacturing & Mining and RPM … we learned about the role of heritage and excellence in a stock study.

Ken’s connection with successful companies — and more importantly — those corporate partner organizations that shared a commitment to retail investors led to the formation of low-cost investing plans (centered on dividend reinvestment.) The revolutionary program reduced transaction expenses during the formative years of investment clubs. Ken was also responsible for the creation of a people’s choice Nicholson awards doled out to investor relations operations who “got it right” on behalf of long-term investors.

Better Investing: What We Do

After joining NAIC in 1960 and spending a few years working with Tom O’Hara and George Nicholson on seeking local volunteer leaders in order to build out the national network, few people are aware of this but Ken Janke was instrumental in the renaming of the monthly publication.

Ken Janke is credited with suggesting the name, Better Investing, for the magazine back in 1965. From the pages of the publication at the time:

”The objective of NAIC is to promote BETTER INVESTING, to make all of us think, analyze, weigh, evaluate and judge before investing our money. There are always those that will scoff at the [subliminal curiosity] of the prospect of regularly investing as little as $10 or $20 a month. …modest amounts grow into sizeable sums. If you follow NAIC principles, your objective is to buy value, and to think about price-to-earning ratios. You want a reasonable EXPECTATION of increasing your investment, you are suspect of mob psychology, and you are patient up to a point. All of this should add up to BETTER INVESTING, an exposition of NAIC objectives.”

A Foundation of Serving, Giving …

I sometimes wonder if we staffers were fully aware of all the charitable things that he did. We knew about the NFL player’s association tournaments, but I’m not sure about the cancer and muscular dystrophy charity tournaments over the years. Ken’s son, Ken Jr. asked investment club partner Bob Hines to share some remarks at the funeral. Bob represents the intersection of many channels of Ken’s life from golf to investment clubs to commercial ventures to family.

Back in 1973, three things happened to Gerald Ford. (1) President Nixon resigned. (2) Michigan native Gerald Ford became president and pardoned his predecessor. (3) President Ford got a letter from Ken Janke. In his role as chairman of the American Cancer Society charity tournament, Ken decided that Gerald Ford would make a good honorary chairman. 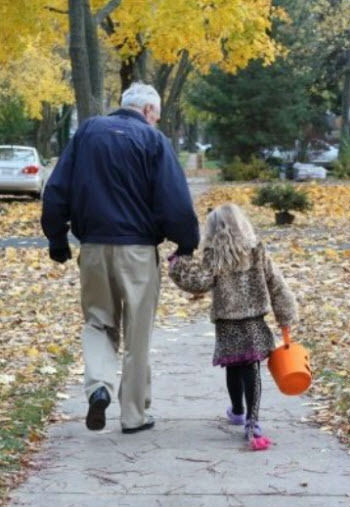 When informed, Hines shared that Ken immediately penned version two of the invitation. “How thoughtless of me. You’re obviously extremely busy and apparently need more notice. Now that I’ve regained my senses, I’ve penciled you in as the chair for next year’s tournament.”

President Ford was unable to decline a second time.

Out of Africa … Memorable Moments

Ken and I would often be among the first to arrive early (quite early) most days of the week at the office. His lessons on patience and discipline are a part of everything that I know about investing. His book recommendations (including “The Winning Habit” by Mark J. Appleman) are treasured. Those morning coffee sessions are simply priceless. And I’m sure he was behind the prank at my very first stock selection committee presentation where he and his colleagues listened to my pitch and responded with, “Dunno fellas, but this looks like a turnaround situation” and they all proceeded to invert their Stock Selection Guides. As they pretended to continue a deep discussion, I was left aghast, jaw on table … until one of them broke formation followed by a round of laughter. Suddenly that Dubsdread sand trap sprung to mind … warmly.

Ken is also credited with bringing the husband and wife team of Don and Nancy Danko to the publication. Soon after I joined the BI staff, one of the Danko daughters came down with a serious health challenge while serving on a mission trip in Africa. In a most unforgettable moment for me, Ken’s response to an anxious mother and father (arm wrapped around both of them) was … “Go. Immediately. No worries. If there’s anything I can do — ANYTHING that you need, say the word. Take care of your family.”

Even if you never had the honor of meeting Ken Janke, it’s my hope that in some small way, you just did. Patience. Discipline. Family. Thanks, Mr. NAIC. Fore!