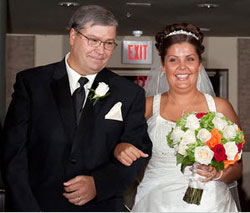 The Next Act: Building Her Own Tin Cup. Lindsay has been associated with investing and education for as long as she can remember. She’s distributed handouts at seminars and workshops and knows the full value of “breaking bread” at Community events like our national convention and next weekend’s InvestEd. Patience, discipline and commitment can prove most rewarding.

… and Dreams Realized. You might be wondering what the wedding of one’s daughter has to do with investing. Trust me. It has everything to do with investing. From the blessings all around us to the opportunities to gather with dear friends and family in banquet mode. From the lessons learned from spirited enthusiasm, patience, diligence, reliability and hard work to voracious appetites for applied knowledge borne of relentless curiosity. My remarks to the bride, groom, our families and guests are excerpted here. Investing well is an important part of our lives and for Lindsay and Nick — their promising futures … and it all started with a box of crayons.

Our little girl would literally sit on the floor of our living room during investment club meetings back in 1993. Yes, right in the middle of the meeting. Lindsay was 7-8 years old at the time and the highlight every month for her was the arrival of club partner Cheryl Prescott, spouse of my work colleague, and more importantly, a professional educator. Cheryl taught young children and Lindsay looked forward to every monthly meeting knowing that they’d color with crayons or read a book together.

Fast forward some 15-16 years. Have you ever seen a more beautiful bride?

The closest I can come is 27 years and one week ago when Lindsay’s wonderful mother and I said “We will.”

I recently heard a radio talk show debate on the incentives for Christians to focus on reaching heaven. Think about some of the marketing images that have been conjured up over the ages. Blue skies. Fluffy clouds. Laying around in a robe with a golden rope for a belt … listening to harp music 24/7.

Don’t get me wrong. I like harp music in moderation. And I’m willing to be a cloud potato for a good football game (like when Illinois next wins the Rose Bowl), but suspect that other people have very different images of what heaven should be like. We think of our own Kurt Kowitz and his wife, Tina. They like to go rock climbing. I suspect and know that potato behavior isn’t very high on their list. Throw in some white water or a sea kayak — and Kurt and Tina are “all in.”

When Jesus tried to describe heaven to the people, he often talked of banquets, and specifically, wedding banquets most often. It’s fair and accurate to describe Lindsay’s new family as a walking, living and breathing banquet that never seems to end. We refer to the groom’s residence as the Hurst Castle, renowned for feasts and festivities championed by the the groom’s mother, Rose Hurst. (In fact, our son and I stopped by to pick up a couple of the young men to head for the church and were greeted with a feast before the wedding. I nibbled and Alex graciously indulged.)

I’ve been blessed with many angels. I vividly remember when Wendy first held my hand … when Lindsay was born … and it may be a challenge to think of Alex (see ER, April 2006) as a little angel, but he is.

A Heritage of Good Choices

Any parent will likely appreciate the following statement in ways many can only hope to understand: “Our children have blessed us by making good choices their entire lives.”

We honored Lindsay’s grandparents during the reception as I shared the reality that choices and character are no accident. We can see traces of every one of these amazing four people in literally everything she does. From the spirit and enthusiasm of Grandma Judy to the incredible patience of Wendy’s father, Richard — the traits are strong. Richard had a wife and three daughters. The house had one bathroom with one sink. Grandpa Richard exudes patience. Grandma Judy greets each new day like it’s the best day ever and has been rumored to annoy house guests harboring intentions of being grumpy in the morning. “Uh, that’s a midwestern thunderstorm … and we were going golfing?” “I know. Isn’t it great? Now we can play rummy or Scrabble!” Attitude.

A few years ago, Baltimore Oriole shortstop Cal Ripken, Jr. surpassed the record for consecutive games played by the legendary Lou Gehrig. The game total was 2632. It’s impressive, but (1) it’s a game and (2) baseball players get nearly six months vacation every year. Lindsay’s Grandpa Gibby (my Dad) can proudly display an honorary plaque for not missing a single day of work on the railroad in twenty-five years! Dad — yes that same one you’ve heard about as the advocate/enforcer for Colgate-Palmolive (see ER, September 2008) — also has a picture of him holding every single newborn grandchild on his refrigerator. My mother says, “I didn’t marry him because he was smart. He’s more than ‘smart.’ He’s extremely intelligent.” Reliability. Compassion. Intelligence.

Lindsay’s Grandma Mary (my Mom) has an insatiable appetite for reading. She devours books. As a teacher, Lindsay will draw on this lineage of natural curiosity and wisdom. Mom ran “Grandma’s Camp” for years, embracing all of her grandchildren for a week during the summer. Lindsay and Alex looked forward as they knew they’d be reading with Grandma and ultimately, allowed to drive the golf cart about the yard and neighborhood from the time they could barely reach the pedals. Responsibility. Relentless curiosity. Wisdom.

Our banquet audience treated both sets of Lindsay’s grandparents to a standing ovation in honor of their recently celebrated 50th anniversaries. Longevity, too.

All young fathers know the feeling: we “steel” ourselves in preparation for ultimately meeting a young man who wants to “court” our daughters. I spent years steeling myself as I prepared to be open-minded, polite and hospitable no matter how incredibly UNIQUE the young man might prove to be.

Which takes us back to good choices … because we recall the day when we heard, “Mom and Dad, I’d like you to meet Nick.” Nick (a high school sophomore at the time nearly eight years ago) was a good student, accomplished athlete in football and baseball, a gentleman and an extremely hard worker. (I think he had a meat cutters “license” at the age of 12!) All of my steely preparation was for naught!

Many of you already know the rest of the story. Lindsay now enters the next phase of her life, having recently graduated from Michigan State with a degree in Spanish (and Math) Secondary Education.

We have a father-daughter “deal” that she’ll use her 403(b) to build her own Tin Cup. Nick is a promising restaurant industry consultant, specializing in turnarounds and operation strategies. He’s also on the 2009 Groundhog Challenge leader board and intends to pursue a lifetime of strategic long-term investing with discipline, patience, hard work, enthusiasm, relentless curiosity … well, you get the idea.

I took Lindsay as a 13-year-old to Les Miserables on a father-daughter date. She was adorned in an evening gown and I wore my best suit. She remembers sitting on the edge of the orchestra pit and attempting to eat Twizzlers while the band hissed at her when she crumpled the wrapper. To this day, one of her favorite songs from the play includes the verse, “To love another person is to see the face of God.” We believe that God doesn’t make mistakes, so that including His presence in a marriage makes for an unbeatable 3-way team.

Love. Be willing to be loved. Repeat. Pass the crayons.