A great small company, in our estimation, should exhibit the same characteristics as great medium and large companies.

Writing about small stocks, those companies that manage to grow revenues at 12% or more, has always interested me. Most folks know the one of my primary sources for ideas for great small stocks disappeared at the end of October 2015. For more than 35 years, Forbes magazine had published a list of the 100 (sometimes 200) Best Small Companies in America. That list was not published in 2015 or in 2016 so I was forced to find other sources of ideas. One list that I always used, even though it was not technically a small company list, came from Fortune magazine. The list is titled America’s Fastest Growing Companies and has proven to be a fairly decent stand-in for the Forbes list. I really wanted a list, however, that focused on small, high-quality companies.

After some deliberation, Mark and I were able to create our own list directly from Manifest investing. We also knew that we could count on subscribers and fellow long-term investors as a source of small company ideas. We set some criteria similar to the Forbes list like company revenue under $1 billion and no asset-based companies like banks and insurance companies. We wanted great small companies and we preferred that they have PAR values which made them attractive candidates at the time of selection. The Manifest Rank, which is one screening parameter on the Stock Screener, is a combination of return forecast (PAR) and the Quality Rating. The higher the Manifest Rank, the more attractive the stock. Both characteristics matter. 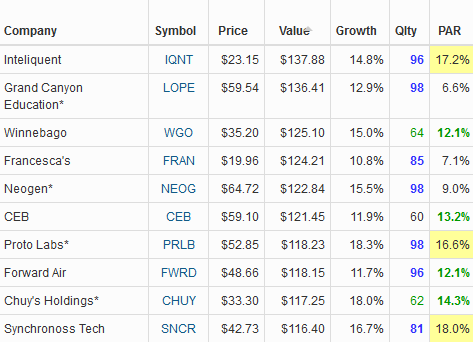 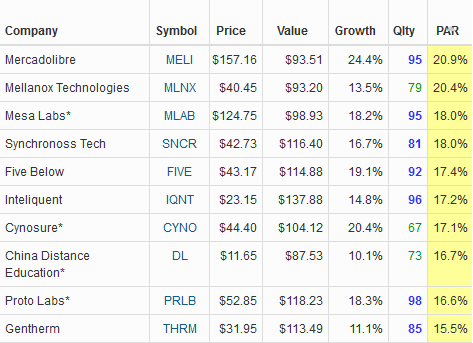 This Year’s Best Small Companies: Top Ten PAR Forecasts. This screen focuses on the companies with the most robust return forecasts and provides a source of ideas for further study.

Using the Stock Screener we began the search. Our goal was to list 40 or 50 of the best small companies. The top ten stocks on the list are presented on the accompanying listing. They are sorted by value. When the dashboard was created, $100 was allocated to each holding. Here’s the top ten performers as of December 6, 2016 (a really short time span from the October 31 posting).

Not to brag, but I own 2 of these companies, Neogen (NEOG) and Proto Labs (PRLB). Many of us first discovered companies like this from scanning lists like the Forbes list over the last couple of decades. I like to look at this list after it’s sorted by PAR value. The second chart provides another look, this time from highest-to-lowest return forecast, limiting the field to the top ten.

Here’s what I demand out of small companies that I consider for investment. First, I want a little bit of history as a publically traded company. I will not look at companies with less than 4 years of history. Secondly, I want sales and earnings growth lines that are as straight and parallel as the lines from medium and large companies that I hold.

I am picky! A great small company, in my estimation, should exhibit the same characteristics as great medium and large companies. If the small company has nine or ten years or more of history, I can live with some volatility in the early years but I want companies that I own to show consistent growth over at least the last four or five years.

I also demand high quality from the small companies I consider. I might stretch the bottom of my range to 75 but, generally, I insist on 80 or better as a quality rating. That usually assures me that I have decent financial strength and profitability characteristics.

“You have to learn that there’s a company behind every stock, and that there’s only one real reason why stocks go up. Companies go from doing poorly to doing well or small companies grow to large companies.” — Peter Lynch

The list contains a new restaurant, a brewery, a semiconductor manufacturer, some business service companies and a provider of dental products for braces.

CaesarStone (CSTE) is a company that has been featured by Susan Maciolek during our Round Table webcasts. Universal Display (OLED) was added to the Round Table tracking portfolio by Ken Kavula and Mark Robertson back in April 2014. The nomination was also “seconded” by the audience. Universal Display has gained 33.3% (annualized) since then while the Wilshire 5000 has advanced 6.3% for an excess/relative return of +27.4% since the time of selection. OLED is likely to be celebrated during our February 2017 Round Table awards gala. 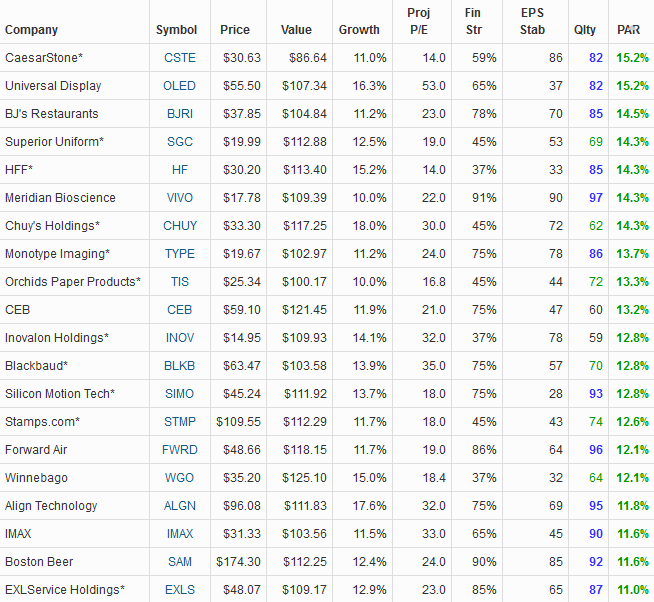 Best Small Companies In The “Sweet Spot” (12/6/2016). Because PAR values that are more than 10 percentage points greater than the market median return forecast (MIPAR) can be a little frothy, I am focusing on PAR values in the Sweet Spot, namely 5-10% above the current average. Tracking Dashboard: https://www.manifestinvesting.com/dashboards/public/best-small-2016

Take a moment to look at my list of seven or, better yet, peruse the entire list. Some of those nosebleed return forecasts could prove to be worthy of further study, too.

You can find it by looking at the public dashboards on the right side of the Manifest Investing homepage. Click on MORE and then look for Best Small Companies 2016. The entire dashboard is there for your enjoyment and further exploration.

Drop me a note (kkavula1@comcast.net) and let me know which of these companies you’d like me to feature in an upcoming article.

Thanks again, everybody, for helping to hunt down the small company opportunities.

Ken Kavula is a retired educator and successful long-term investor. Ken has served in a number of leadership positions for the National Association of Investors and is active in four investment clubs. Welcome to the Clubhouse. Subscribers are invited to share their favorite experiences, suggest best practices and most importantly, let us know “What’s on your mind?” What topics and questions do you have? We all get better when we do this together. Email Ken at kkavula1@comcast.net.