This month, Cy Lynch takes a rather ... uh ... unconventional look at the preservation of traditions and the lessons that decades of investing can teach us. 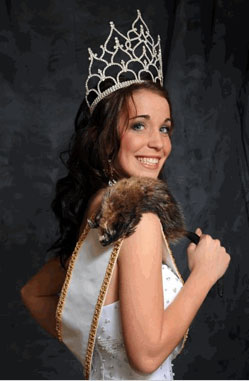 Dakota Abbott, the new Miss Outdoors, chose to skin a muskrat as part of the contest. The recent waning of this small-town institution inspired some tradition-minded girls to get involved. We believe that many of the discoveries and traditions of the 1984 NAIC Investors Manual are worth crowning, too. Photo: Preston Keres, Washington Post

This month, Cy Lynch takes a rather … uh … unconventional look at the preservation of traditions and the lessons that decades of investing can teach us. The pageantry of nearly 70 years of successful growth investing leads us to affirmations that (1) expected income statements make a whole lot of sense, (2) the best measure of company size is the forecasted sales growth rate, and (3) sales growth is one of the most important characteristics we should monitor and understand.

What would you think if you went to a beauty pageant and saw a contestant skinning a muskrat during the talent competition? Then the winner departs, victoriously dressed in full formal regalia, with a pelt tossed over her shoulder. Seems that’s becoming the norm at the 54th annual Miss Outdoors pageant held last month in Golden Hill, Maryland, a small Chesapeake Bay town about 60 miles from Washington, D.C. If you are like me, you’re a bit shocked, wondering what this is all about.

The beauty pageant is part of the 2008 National Outdoor Show, which also includes a muskrat-skinning contest. Until the 21st Century, women didn’t participate in both competitions. There were pageant beauties and skinning people. That changed when Tiffany Brittingham entered both in 2003, skinning her muskrat while adorned in full makeup and sparkly earrings. In 2005, the year she was crowned Miss Outdoors, she combined both, walking out for the talent portion of the beauty contest with a muskrat thrown over her shoulder.

Last month, two contestants entered both as well. One, Samantha Phillips, also chose to skin during the pageant’s talent portion. She won that talent portion, though the other “duel-contestant,” Dakota Abbott, won the full pageant. So what does this have to do with investing?

You probably reacted with initial shock. I wonder how we’d have reacted when NAIC founder George Nicholson suggested back in 1939 that we could successfully invest in the stock market. The country was just starting to rebound from the Great Depression. Jobs were still hard to come by and the memory of the 1929 Crash was still fresh on everyone’s minds. A group of 20-something guys did hear that message — and fortunately for us — allowed their dreams of successful long-term investing to overcome their initial shock and in 1941 formed, the first club in what eventually became the National Association of Investors (NAIC, now armed with its BetterInvesting brand).

While reading of muskrat-skinning beauty contestants, I was particularly impressed by what they said drove them. Ms. Abbott and Ms. Phillips said they entered both contests out of their “strong attachment to a fast-changing place and the fear that someday people here might not care about beauty queens or know the [nuances of proper muskrat preparation.] If we don’t keep it [the National Outdoor Show] going, then it’s not going to go anywhere.” They found security in their heritage and wanted to preserve it, while changing to meet current challenges.

If you are like me, you belong to, or may have belonged to, this national association. You have used, and to varying degrees still use, their stock study tool, the Stock Selection Guide (SSG). Consequently, we trace our investing heritage back to George Nicholson’s “Grand Experiment.”

I, along with a number of would-be historians, have been reviewing legacy NAIC publications seeking to learn more about that heritage. One of the primary resources that we’ve discovered is the NAIC Investors Manual for the Individual Investor, copyrighted in 1984 (1984 Manual). It’s noteworthy that George Nicholson wrote the forward to the 1984 Manual and was serving as an advisor to NAIC when it was published. We’ve also come to believe that Mr. Nicholson was probably “at the top of his game” back in 1984 during a remarkable lifetime experience of long-term investing. Particularly striking to me, while reading the 1984 Manual, was its great emphasis on the importance of sales growth to investment success, which became clear to me in four respects which I will take up individually. All page references are to the 1984 Manual.

“Other things being equal, an investment is likely to increase in value at about the same rate that sales grow.” [page 13] If you are like me, you find security in this confirmation of our oft-repeated mantra, “Sales drive earnings. Earnings drive price. Therefore, sales drive price.” Of course, just saying it doesn’t make it so. I am currently gathering statistical evidence for the direct correlation between sales growth and price appreciation and will follow up with posts to our MANIFEST Forum as that develops.

In a related vein, when I discovered MANIFEST nearly three years ago, I was struck by its consistent use of sales growth as the primary measure of a company’s growth. The sloppy tendency of many to confuse, muddle and interchangeably use sales and earning per share (EPS) growth had long bothered me.

Again, I find security in the 1984 Manual statements in that regard. "The rate of sales gain shows how rapidly the business is growing. [page 71] “Sales are the lifeblood of any business.” [page 31]

We find affirmation to our belief that growth is best measured based on sales. Investment returns are directly connected to that growth, a well-grounded reality in our heritage.

"[W]e normally first record sales of a company on the [SSG]. We are looking first to see if the company is achieving the rate of [sales] growth we are looking for. If it doesn’t have that rate, we may discard it and move on to a study of another company. [page 57]

The Preferred Procedure Really Was Preferred! In this slide from Mark Robertson’s recent presentation at an investment education fair in Raleigh, N.C., he shared that MANIFEST’s expected income statement approach was the norm back in the early days. The 1984 text is shown on the left.

So, what is the rate of growth that we should be looking for?

Throughout the manual, the emphasis is on finding companies growing faster than the economy as a whole and competitively with their peers, in other words, growth companies. We’ll look closer at minimum levels of desired growth in the next section, but it’s clear that a company which isn’t growing faster than the economy doesn’t meet this initial quality cut. Average annual nominal (including inflation) growth in the U.S. Gross Domestic Product (GDP) from 1929 through 2007 was 6.5%. More recently, annual nominal GDP growth was 5.5% and 5.2% for the last 20 years and 10 years through 2007, respectively.

There is no “official” MANIFEST recommendation on a minimum level of sales growth, but we build on the concept of competitive growth, including growth relative to industry peers as one-fourth of our Quality Rating. Based the 1984 Manual, and the historical record, investors could be well served by establishing a minimum expected sales growth rate of 5-6% as a minimum quality threshold.

“We are seeking, overall, an average [portfolio-wide] growth rate of 10% compounded annually or better.” [page 13] “As a goal it is well to set an objective of buying companies which will be growing at a compounded rate of 10% a year or more. However, this does not mean that you will not buy companies which have a lower rate of growth.” [page 35]

“In selecting stocks for your portfolio, it seems wise to choose about 25% from major companies in major industries [growing from 5-7% annually], about 25% from smaller companies [growing at 12% and upwards] and the balance from the range [in between].” [page 12] The 1984 Manual calls this “The Big Company – Small Company Concept.”

Most telling, annual sales are never mentioned as a measure of company size in the 1984 Manual. Neither is market capitalization. We find further affirmation in knowing that our MANIFEST view that company “size” is best measured by sales growth is well-grounded in our heritage. We have no specific MANIFEST-suggested portfolio allocation by size. We do build on this heritage, however, by focusing on the overall average sales growth forecast (keeping it in the 10-12% range).

Shifting from portfolio growth, the specific growth rate we should set as a minimum for a particular stock “will be in accordance with the area of our total portfolio to which we are making an addition.” [page 13] In other words, it depends on whether we are seeking to add a large small company (or one in between). Of course our “minimum” in a particular situation may also vary based upon whether our current portfolio growth rate is meeting minimum targets.

Understand that the portfolio growth rate suggested in the 1984 Manual contemplated an expected dividend yield (4-6%) than is realistic today. In connection with the relationship between portfolio sales growth, dividend yield and meeting our total return goal says, “Your total portfolio can achieve a distribution of small and large companies and yet have an overall average growth rate of 8-10%, which, when added to dividends puts you in the area of total income you are seeking.” [page 12]

Since a dividend yield of 1-3% is more realistic currently, it seems prudent to raise our portfolio growth goal to compensate. Perhaps we best shoot for the high end of our MANIFEST-suggested 10-12% range?

Ralph Seger prepared this Stock Selection Guide back in 1956. Sales and pre-tax profits were plotted in the visual analysis with no sign of EPS? The 5-yr EPS forecast was derived from an understanding of the business model and profitability.

I’ve long been puzzled why the NAIC “preferred procedure” (the name given to the process referred to in the above quote) was called “preferred” when nearly no one seemed to use/teach it. Even when I first started doing the calculation about 20 years ago, I almost always rejected the result, instead basing my EPS projection on the EPS trend line in Section 1 of the SSG.

At MANIFEST, we build on this heritage by using the “Expected Income Statement” in our Fundamental Forecasts for each stock we cover. That’s only logical since “sales are the lifeblood of any business.” That practice also encourages us to understand financial business model and the why and how behind our projected EPS.

In conclusion, change and remaining true to our heritage isn’t inconsistent. Indeed, our muskrat-skinning maidens became change agents in order to preserve heritage by participating in both parts of the event.

The NAIC Stock Selection Guide (SSG) is a tool used to perform fundamental stock analysis according to the principles of the National Association of Investors (NAIC) For more, see: www.betterinvesting.org.

Cy is a respected and experienced long-term investor and contributor to educational efforts for the National Association of Investors Corp (NAIC.) He is a registered investment advisor.